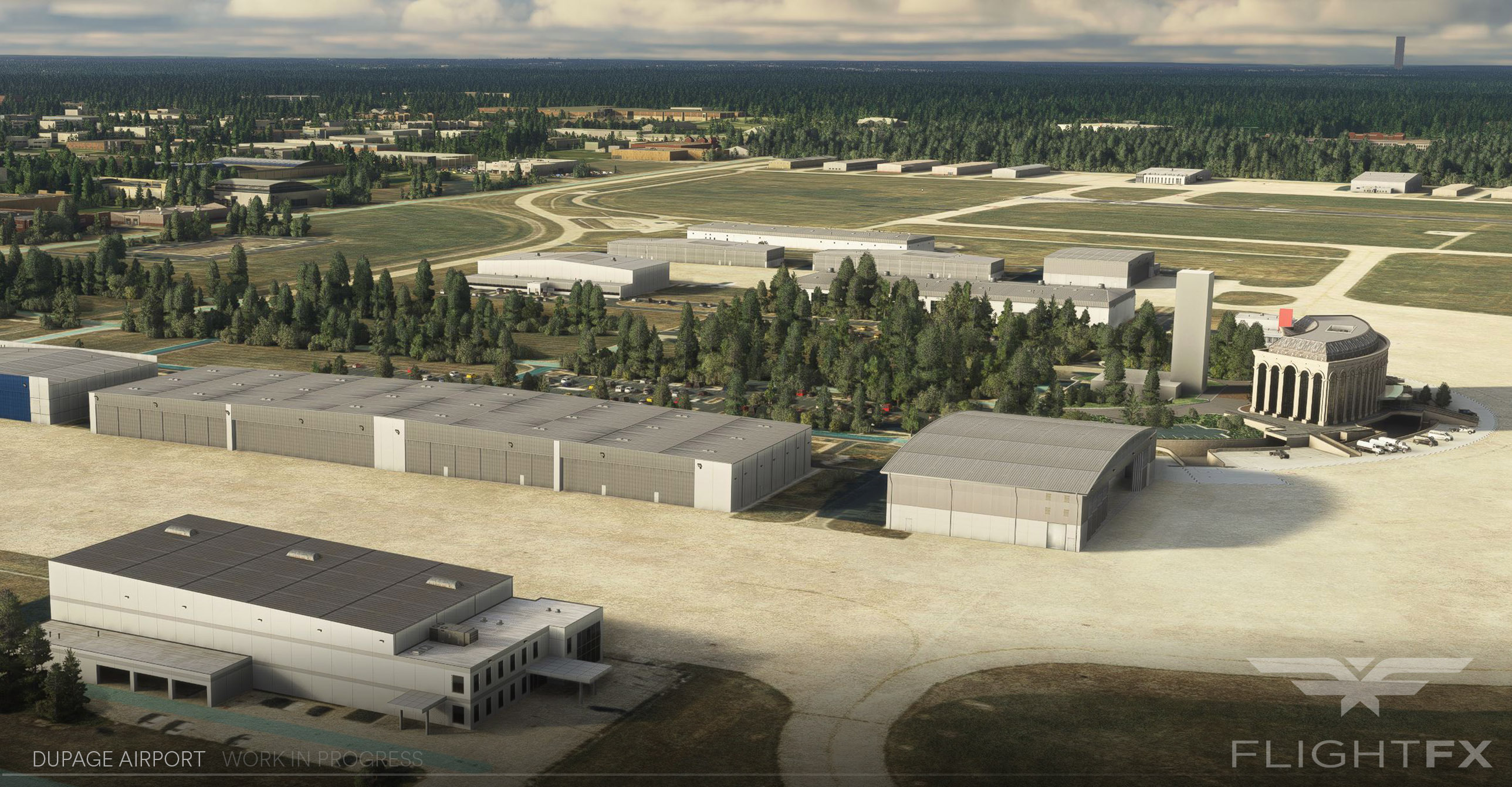 FlightFX has been generating quite a lot of noise lately with their debut into the flight sim community. Their first release on the 17th of June, Chicago Executive Airport has opened up a pandora’s box of projects, with the team seeing two airports in development; DuPage and Pompano Airport, their direction has taken a turn with them letting the cat out of the bag that they’re now working on aircraft add-ons, namely, the Cirrus SF50 Vision Jet:

The team today has now dropped a new set of previews on their DuPage Airport, an airfield complex situated to the West of downtown Chicago. The team is making major progress, announcing that 90% of all major structures are completed with the airport’s control tower the sole remaining building to be completed. Once the major modelling work has wrapped up, the team has informed that the next stage involves incorporating details to the buildings, editing the satellite imagery and building the airport layout, and populating the airfield with clutter objects. Once that is complete, the project moves onto the beta testing phase, followed by the release.

The team projects a November release, concrete details on the exact date and pricing will be announced as the release nears. This would be the team’s second release, following their debut Chicago Executive Airport project and would be available in the same outlets with additional stores in talks, namely: Contrails, Orbx, and Flightsim.com store with two other marketplaces currently in talks.

The real airport is assigned to be a reliever facility for Chicago’s two main gateways, O’Hare Intl. Airport, the main international gateway, and Midway Airport, which is primarily served by Southwest Airlines, although its main role is focused on GA activity. It has seen recent expansion projects due to it taking in more traffic from the overcrowding aforementioned airports. In recent history, it is the centre of much controversy revolving around the airport’s expansion in the 80-90’s.

For the team’s rendition, they prides themselves over the painstaking detailing they’ll be putting into the product, which is largely informed by a comprehensive on-site photographic survey, “Excellent reference material is essential to creating a true to life rendition”, the team has worked with the airport authorities to make this happen, which the team at the airport are very accommodating.

Tom Livings, the Design Lead for the team stated that “The amount of support that we received from the Management Staff at KDPA has been nothing short of amazing. The level of airside access has been unprecedented.” Nick Sdoucos, the team partner added “We really got to see the parts of an airfield that you never get to see.  Walking around on taxiways, looking inside storage hangers, touring the ARFF facility. It was amazing being there and taking it all in.  Really, really grateful for that.”

In addition to the stores mentioned at the beginning of this article, the team additionally reveals that moving forward, their releases will also be available on the in-sim marketplace. We’ll be closely following FlightFX’s projects including DuPage Airport, be sure to keep a lookout on our coverage and stay tuned! For news and updates directly from the team, join their Discord server, in addition visit their website to explore their work and Chicago Executive Airport release.