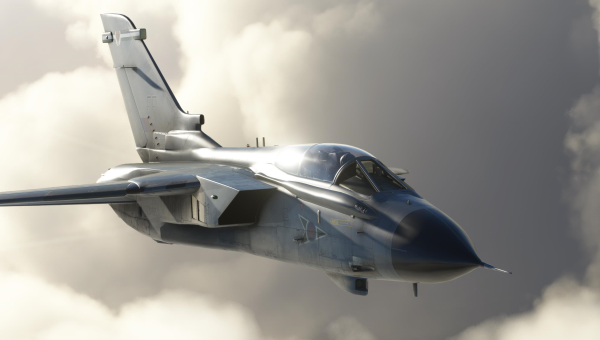 Last week, Just Flight announced their newest project for Microsoft Flight Simulator - the Tornado GR1. The Tornado GR1, a step up from the developer’s Hawk T1, will bring the perfect experience for pilots looking for the thrill of high speed, low altitude flying.

According to the developers, the Tornado GR1 will feature 8k textures and study-level systems. Judging by the pictures provided, the exterior and cockpit of the jet have been completely modeled and textured, including moving parts such as spoilers and reverse thrust buckets. At this stage, no feature list or any additional details have been provided, though the team promised to keep the community updated on the aircraft’s progress.

Tornado GR1, a collaboration between the UK, West Germany, and Italy, is designed to be a multirole military aircraft capable of carrying out a variety of anti-ground, intercepting, and air defense suppression missions. First produced in 1979, different variants of the Tornado saw action in the Gulf War of 1991, “Bosnian War, Kosovo War, Iraq War, in Libya during the 2011 Libyan civil war, as well as smaller roles in Afghanistan, Yemen, and Syria”.

Currently, the developers are yet to announce the release date and pricing of the jet aircraft. Threshold will keep you updated on this front.