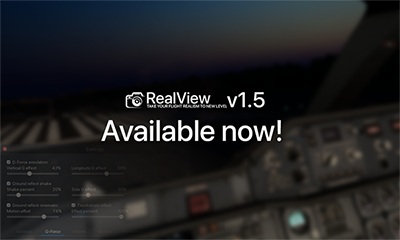 X-Plane plugin developer HST Simulations, has released a major update for RealView. The update takes the plugin to version 1.5, which brings “complex changes on [the] plugin side”.

The update was announced via a thread on the X-Plane.org Forums, version 1.5 of the plugin brings a vast amount of new features.

Major update highlights include optimisation, achieved through switching to a new framework, and new effect previewing. Version 1.5 comes at no cost to existing owners of RealView, but for non-owners, it is priced at $18.95.

A full changelog for 1.5 has also been provided, which is as follows:

According to HST Simulations, the most important change in the update was “moving to a new framework like upcoming xAmbience Pro”.

It was stated that:

“Now it will work more smoothly and stable. Also, we fixed all [the] old bugs with camera stuttering, and other[s].”

Some previews of new features brought in the update: