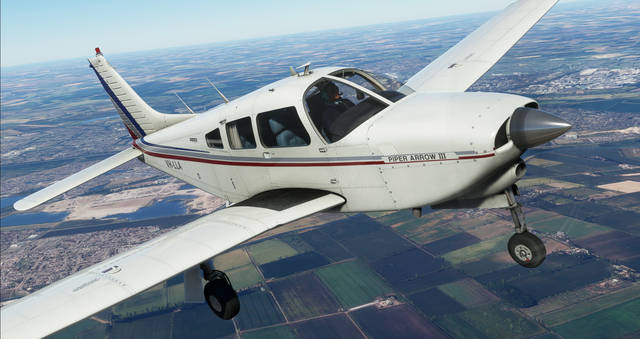 The list of features can be viewed below:
Model

The Just Flight Turbo Arrow III and IV feature an MSFS-native (Wwise) sound package taking full advantage of the new capabilities. Every little detail has been faithfully recreated based on high-fidelity recordings from real-life PA-28s.

Included with the download are both the Turbo Arrow III & IV, the most distinctive differences being the tail design, with the arrow III having a conventional tail and the lV having a unique T-tail. Just Flight also stated that the flight dynamics are accurate based on real-world performance, handling data, and input from real-world pilots.

The Turbo Arrow was originally developed for the Prepar3D platform, later converted to X-Plane 11 in early 2019. The team has now converted the aircraft to Microsoft Flight Simulator.

The aircraft can be bought on Just Flight’s website here, retailing for 44.99 USD.