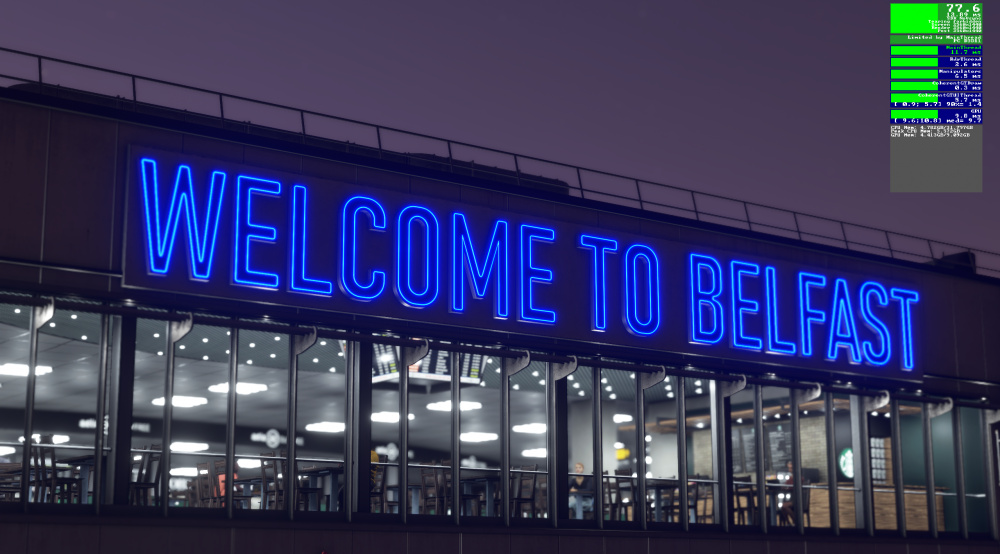 Earlier this week, scenery developer PYREEGUE published a short update on its upcoming Belfast/Aldergrove International Airport (EGAA) for Microsoft Flight Simulator. In the update, the team previews the modeling, texturing, and lighting of the airport through a series of short videos, demonstrating their progress and the new technologies being implemented on the scenery.

Based on the videos, it can be concluded that the airport's terminal has been mostly completed. As the plane taxied toward the gate, we can see that the overall building, signage, small objects (ground vehicles, AC units, etc), and lighting are almost fully modeled and textured. Additionally, we can see through the building’s window into the terminal interior where everything from chairs, vending machines, and walking passengers have been modeled/animated. According to the developers, what is being shown in the videos only represent a small portion of “new crazy things” that Belfast Airport will feature.

The team also hinted that the new features brought to Belfast will come to “great stuff” featured in EGAA will eventually be integrated into its other airports, starting with EGPH before moving to EGPF, EGNX and EGPD.

Currently, the developers are yet to announce a release date and pricing for Belfast airport, though they did indicate that they “are not far from release”. Threshold will keep you updated on this front. For more information on the scenery, check out a previous Threshold article.